The Most Important Punctuation Rules

The title of this article contains a bit of an untruth – every punctuation rule is an important one. Punctuation allows for the creation of clear, concise and compelling writing, which is the key to a successful piece of copy. Without punctuation, we couldn’t separate the independent from the subordinate, emphasise, exclaim, show possession or end a sentence.

The English language is a mélange of various influences, broadly Germanic and Latin but also from various regional dialects. As a result, English doesn’t contain the hard and fast grammatical and punctuation rules that the Romance, Germanic and Slavic languages have. Instead, we are left with a set of rules that almost always have an exception.

Despite this issue, let’s pin down the most critical punctuation rules (or at least an interpretation of them). 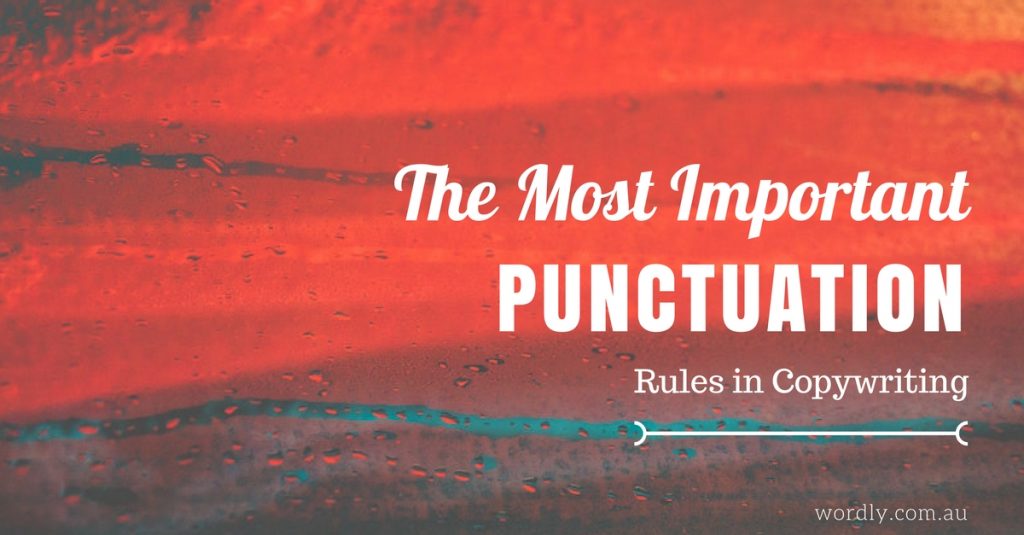 The full stop is the copywriter’s best friend and it should be used liberally. The full stop is used to chop sentences up into snappy little sound bites that are easy-to-digest. Copywriters who neglect their full stop do so at their peril. The best way to judge your full stop use is to think of it as a breath. If you re-read your copy and you get breathless before the end of a sentence, you need to throw a full stop in.

The comma is a tricky punctuation point. Careful proofreaders will often spend hours removing and replacing commas. Commas are used for a multitude of reasons:

Colons should be used to link a complete statement into one or more related sentences or concepts, such as a quote, a list or a comment, e.g. ‘There are three key concepts in this syllabus: the other, hermeneutics, epistemology.’ Colons are also used in titles, such as ‘Brooklyn: A Love Story,’ or, ‘Web Copy: The Do’s and Don’ts.’

The semi-colon is as slippery as the comma. They are also very useful, especially in joining two equally important independent clauses to create compound sentences, e.g. ‘Peter studied for six months; so, he knew the exam back-to-front.’ In this case, both clauses are given equal weight due to the lengthier pause that the semi-colon allows.

Semi-colons are also used to separate items in a list where a comma is already required, e.g. ‘John Smith, CEO; Bull Snipe, CFO.’

There are three types of apostrophes:

The most common mistake that people make with apostrophes is when possessives are confused with the plural, for example ‘two baby’s,’ instead of,’ two babies.’ Or, ‘Freds ideas,’ instead of ‘Fred’s ideas.’

The Dash and The Hyphen

Copywriters underuse the dash; it is a vital tool in adding emphasis to your sentence. It should be used sparingly to maintain its effect, but if used correctly it can add real gravitas to a point, e.g. ‘You don’t need to know anything else except this – you need this product.’ Dashes can also be used to set off a point or thought, in a similar fashion to a parenthesis or a comma, ‘I thought I knew her – I’d known her since I was six – I guess I didn’t know her at all.’ Again, using the dash adds more gravitas than a comma or parenthesis would allow, it makes the aside a vital part of the sentence.

The hyphen is a little more boring than the dash, but it is a vital piece of punctuation. It can be used to create a single-adjective out of two words, e.g. ‘snow-covered’ or ‘sun-drenched.’ It is also used with prefixes such as self (self-assured) and all (all-knowing), as well as between prefixes and a capitalised word (pre-Columbian) and between the prefix and figures or letters (the mid-1820’s).