Seth Godin: Are You Going to Matter?

Seth Godin, the veritable David Ogilvy of the 21st century, was in Melbourne a couple of weeks ago, brought to our fair city by the gals over at Business Chicks. I’ve been an avid reader of Godin’s blog for some time now; part marketing expertise, part big-picture, societal commentary, it’s always much more thought provoking with one’s morning coffee than the Today Show.

For instance, take this little gem from Godin’s most recent post: “And when ‘everyone’ isn’t part of the picture any more, when the long tail is truly the only tail, plenty of people stop trying. They stop reading difficult books or watching less-than-thrilling video, and they don’t push themselves to do the hard stuff, because, really, why bother? Society without a cultural, intellectual core feels awfully different than the society that we’re walking away from.”

Today, I’ve got a little wrap-up of his presentation coming your way.

Who is Seth Godin? 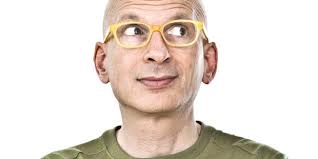 Seth Godin is the author of 17 bestselling books. He writes about the post-industrial revolution, the way ideas spread, marketing, quitting, leadership and, well, changing everything. Seth founded squidoo.com (recently acquired by HubSpot, the community based website allows users to create pages, known as ‘lenses’, to sell products or collect charitable donations). His blog, which he updates daily, is one of the most popular in the world. Before his work as a writer and blogger, Godin was Vice President of Direct Marketing at Yahoo! He secured this high-profile job after selling Yahoo his pioneering 1990s online startup, Yoyodyne.

Godin’s latest book, The Icarus Deception, argues that we’ve been brainwashed by industrial propaganda, and pushes us to stand out, not to fit in. It was this message that was his focus when he visited Melbourne a couple of weeks ago.

Godin opened with a tale from his own career. It was the early 90s. Godin was a freelancer, writing and editing books, and articles. He was one of the first people with access to the internet. He was amazed at the possibilities the technology represented. So, he wrote a book about it: The Best of the Net. It covered more than 180 cool things on the internet, and sold a grand total of 1,000 copies.

At the same time, Jerry Yang and David Filo were in the process of creating Yahoo, a company that today pulls in over $4.5 billion in revenue each year. Godin admits that he stayed in his comfort zone. He stuck with what he knew, instead of investigating what was actually possible.

“They saw a blank slate. I said what do I already know how to make? That’s one of the challenges that the people in this room have. That I have. We look at opportunities and we say well where is the comfortable part? What do we already know how to do? As opposed to saying ‘What’s possible?’ 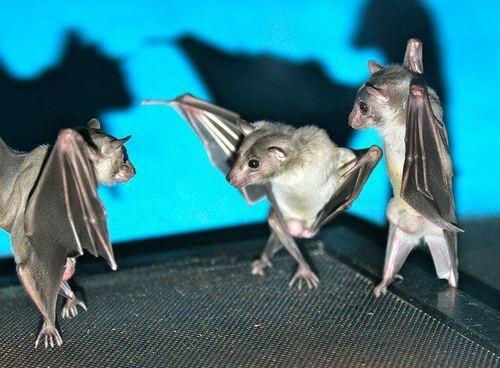 We all need to learn how to see things differently. Just look how different these bats look if you flip the photo upside down. These three little mammals go from dopey looking Transylvanian mascots, to bad-ass extras born to jive on the set of Michael Jackson’s Thriller video. According to Godin (and I’m inclined to agree), if we can’t we see things differently; we’re destined for a future of expensive mistakes.

Ando so, with the rise of mass production, mass marketing was born. In fact, in many ways, mass marketing became a necessity. To move all these super cheap, super efficiently produced goods, one must have a captive audience. Enter mass interruption: TV ads, and radio adverts, and billboards, and print ads. The objective was to interrupt as many people as humanly possible. According to Godin, TV and magazines and radio were all invented to broadcast the adverts of the industrial economy. And advertisers and the buying public bought it all, hook, line and sinker. Companies purchased more ad space, more shelf space, and made more noise, as much noise as was humanly possible.

The scary thing is; all this worked. It all worked for about 90 years.

We all listened, and believed the noise of the advertisers. We responded to the TV ads that promoted average products for average people. We all thought, ‘If everyone else has it, I must need it’. During the age of the industrial economy, the ‘Keeping Up With the Joneses’ mentality was alive and well. Hell, it was flourishing.

But, all of a sudden, about one minute ago, all this stopped working.

The Cacophony of Clutter

Seemingly just a minute ago, marketing by interruption stopped working. Stopped dead in its tracks. According to Godin, too many companies have made too many products that are too much like everyone else’s. There is simply too much clutter, too much choice, too much variety.

Interruption does not work anymore as a marketing tactic. The marketing model that said find some poor shmo and assault them over and over and over with ads until one day they buy from us. It simply doesn’t work anymore. We all have a remote control, and we aren’t afraid to use it. We are all savvier. We all recognise the hard-sell from a mile away. We can see spam at a hundred paces. We don’t want to take the call from your telemarketer. We refused to be interrupted.

We’ve branded ourselves to death. So, we must change the way we market.

Marketing in the Post-Industrial Age

Godin tells us that there is a very simple, four word mantra when it comes to marketing in our post-industrial age: treat different people differently. 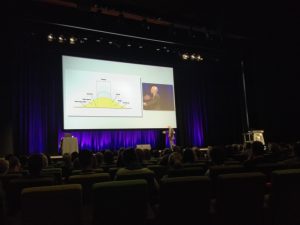 When you think about it, it seems pretty simple really.

More people are now outside ‘the norm’, than inside it. We are all choosing to be weird. Normal people (if there are any left), don’t care about your marketing, and aren’t paying attention anyway.

So, when building your organisation, your brand, your suite of products, don’t ask where your averages are. Don’t look for normal, or the peak of that perfect bell curve. Don’t try to appeal to everyone.

According to Godin, the best way to turn your niche target market, the people on the edges, into raving fans is through connection. The industrial economy is being replaced with the connection revolution. This revolution is based on:

Underlying these four pillars of connection are generosity and art. After all, no one wants to connect someone who is boring, predictable, and selfish.

“Art is the human act of making something that might not work. Of connecting one person to another in a personal way.”

So, what should marketers do?

In the industrial economy setting, marketers used to specialize in hype, in spin, in ads. Today, we need to specialize in tribes, in communities, in support. We need to create products and services that people actually want to connect with. No longer can we use cheap tricks and celebrity endorsements as a quickly fix to a slump in sales. We can’t make average products for average people.

Instead, it is the value of our network that we need to focus on. After all, the value of your network increases as does the number of people that are using it. We now have to be the one and only business in our niche. We need to convince people to want to cross the street to do business with us. Godin uses bookstores as an example of a business that has failed to do this in the connection revolution. Bookstores are still focused on selling inventory, rather than selling the connection. And, when it comes to selling inventory, they simply cannot compete with the likes of Amazon. So, like bookstores all the around world, we need to determine how we can course correct to create more of a connection, more value for all the weird members of our niche market.

Where the industrial economy was based on scarcity, of time, of resources, of people, the connection economy is based on abundance and unlimited choices. If you run a widget factory that is giving away free widget samples, eventually you will run out. But, if you run an idea factory, and everyone takes a free sample, everyone wins. You’ll never run out, and everyone will keep coming back for more.

According to Godin, the most effective way to connect with your niche market: tribes. Fundamentally, tribes are groups of people that share a way of living and connecting with one another. There are million of tribes, of various shapes and sizes these days: religion-based, family, colleagues, interest-based (like Trekkies). And, there are millions of tribes because, inherently, human beings like being in sync. We like being part of something bigger than ourselves. 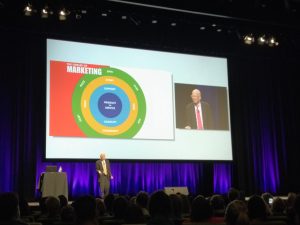 rketers, we need to find a tribe and lead it. We need to think like The Beatles or Bob Marley. The Beatles certainly didn’t invent teenagers, and Bob Marley didn’t create Rastafarians. But, what Paul, George, Ringo, John, and Bob all have in common is that they showed up to lead their particular tribe, their niche of weirdly like-minded people.

The thought of leading is something that does not come naturally to many of us. We have been taught, from a young age, to hold a little bit back. Schools were originally designed to teach children patience, to train children to work in factories, to be normal, to fit in. So, stepping out of our comfort zone, and learning to lead a tribe (even for the purposes of marketing) can be quite daunting.

We need to come to terms with the fact that there is no set of instructions, no guarantee, no map. We simple have to make the change, make a difference and embrace the tension.

Godin’s Tips for Making it Work

Above all, you have to throw yourself off the cliff, and grow wings on the way down.

Success is simply not possible without failure. Think about it: the same man that invented the ship also invented the shipwreck. You just need to take the leap. Leaping with danger is the only type of leap that matters. It is the danger that matters. The tension that matters. Chances are that it will always be too soon to leap, to launch. You will never be ready. But you can be prepared.

You just need to ask yourself, ‘Are you going to matter?’